On the Victoria Embankment, just near the Westminster Bridge is a modern bronze sculpture cast by the same foundry that cast the lions in Trafalgar Square.  This artwork, over looking the Thames, gives London a fitting tribute to one of its toughest periods in recent history.

The left hand panel of the Battle of Britain Memorial shows women working in a factory making a wing for a fighter plane.

During the summer of 1940, the German Air Force started its onslaught for Britain.  Having the distinction of being the first major campaign to have ever been fought entirely by air forces, it also  prevented Germany from gaining its much desired superiority of the skies over Britain, eventually leading to the cancellation of Operation Sea Lion.  This was the planned amphibious and airborne invasion of the United Kingdom, something that no foreign force has achieved since the Battle of Fisbourne in 1797 – and that invasion by the Irish lasted only two days. 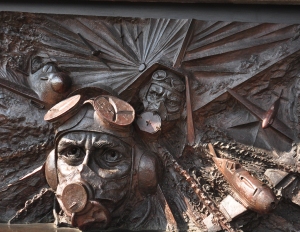 The central panel of the Battle of Britain Memorial shows the brave men of the RAF and their fighter planes.

The memorial, unveiled in 2005, shows several icons of the period.  On the right is St Paul’s Cathedral standing tall as London burns beside it, to the left are the women who took up roles in the factories to support the efforts of the men who had enlisted and at its core the brave men of the RAF scrambling for their aircraft to fight for “Dear Old Blighty”.  Around the outside of the monument are plaques that list the names of the 2,936 souls from 14 countries who played an active role in the campaign.

The right hand panel of the Battle of Britain memorial shows St Paul’s standing tall as the men of the auxiliary fire service deal with London in flames.

Whether a history lover or simply someone who can appreciate a fabulous art work the monument is a real must see on any visit to London, and I think a much deserved addition to my free to visit list for the British capital.